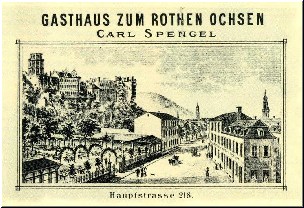 how it all started

For one hundred and seventy years now, the “Roter Ochse (Red Ox Inn)” restaurant (built in 1703) has been privately owned by the Spengel family. Albrecht Spengel, butcher and landlord, bought the house on September 7, 1839, at the price of 11,300 Gulden (German currency at that time). The Red Ox Inn – like no other inn – mirrors history, culture and businnes life of the city of Heidelberg. Albrecht Spengel ran the business safely during the troublesome times of the 1848-revolution until the year 1865. It was already at that point in time that Albrecht Spengel had introduced the so called beer-coins to facilitate the daily cashing up. There are four different types of coins known up to now. The beer-coins were used in the Red Ox Inn until 1965.

It is thanks to Albrecht Spengel’s son Karl that the Red Ox Inn gained the reputation the inn still has nowadays. Many German but also foreign students addressed Karl as “Daddy Spengel”, since he always showed deepest sympathy and understanding for the pleasures and problems of “his boys”. It was also Karl Spengel who announced several times in the “Neue Zürcher Zeitung” that he would be once again in Switzerland and would invite all his friends to a drink. The famous landlord – who appears in the 1926 Palatine annual in the gallery of witty Heidelberg citizens – also was a talented composer which is proved by a song he specially wrote for the “Red Ox Inn”:

An unforgettable event for Daddy Spengel was his meeting with Bismarck in Kissingen in 1892. After the famous chancellour had held his right hand out to greet him, Daddy Spengel ran from Pub to Pub and proudly showed his hand to everyone saying “I won’t wash my hand for the next eight days since it’s the one Bismarck has shaken!” And although so many years have passed by, a letter Bismarck sent to Daddy Spengel is still hanging on the wall in the Red Ox Inn to commemorate this meeting.

Apart from drinking horns, beer mugs and various other trophies, the varied pictures, paintings and lithographs hanging everywhere in the Red Ox Inn give quite a bit of insight into the olden times. By means of said heritages plus the numerous guest books (today more than 30 exist!) it is possible to almost chronologically trace back the days and nights until the end of World War II. (On the left side the signatures of John Foster Dulles, John Wayne, Peter Frankenfeld etc.) 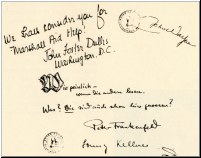 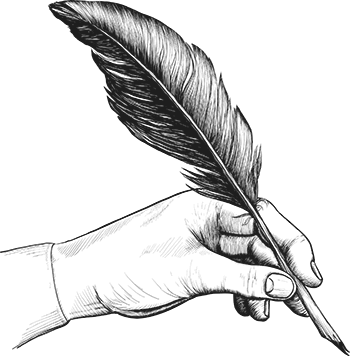 The Red Ox and the students

The most frequent guests then were students of the students fraternities “Freie Schweizer Vereinigung”, “Frankonia” and “Rupertia” as well as of the “Hamburger Gesellschaft”. Students from Hamburg or Switzerland even found a permanent home there. Like many others, the famous Hamburg neurologist Max Nonne, who had been called several times to look after Lenin when he was ill, or the later Swiss Minister of State Joseph Motta spent many hours of their student years in Heidelberg in the Red Ox Inn. A motto of a student reflects the atmosphere of those days: “If you wanna relax from swotting, hop in the Red Ox Inn.”

Even today, many “old gentlemen” and their descendants return to the “Red Ox” to chat about the old times, or to gain an impression of the romance of student life in Old Heidelberg.

Thanks to Gertrud Spengel’s self-sacrificing commitment and thanks to the agriculture products of her relatives who had a farm in Wiesloch near Heidelberg the guests of those days could – despite all deprivation of World War II – enjoy full glasses and satisfying meals in the Red Ox Inn. After the end of the war, Gertrud together with her second husband, Kurt Frankenberger, continued to run the “Ox” for many years. And she still comes and sees how things are at the place that had influenced her life so much.

The currency reform and the subsequent “economic miracle” marked the beginning of a new era for the Red Ox Inn. The gates of Heidelberg were opened to the world so that soon guests from different continents gathered around the tables decorated with wood-carvings and the rooms of the inn were filled with a babel of tongues. Gasthaus zum Rothen Ochsen – Werner Spengel Together with the busy waitresses Ella, Emma, Ida and Lina, who were part and parcel of the establishment for more than five decades, the Spengel family could welcome many famous personalities of science, arts and politics. The The guest books of those days can be read like a “Who is who?” of this time.

In 1965 Werner Spengel became the chief of the Red Ox Inn together with his wife Ute. Since the death of her husband, Ute Spengel has taken the control of the Red Ox Inn. Meanwhile she has given the business to next generation, her son Philipp and his wife Anne are running the Inn now.